Home » press » The Times of India

The Times of India


Prejudice, says social psychologist Mahzarin Banaji, is often irrational. The Harvard professor describes the dark corner of the human brain that hides implicit biases as a 'blindspot' . What else could describe the vicious assaults on Sikhs in the US in recent times? After all, none of the faces behind any of the terror attacks in the US wore turbans or sported beards.

It is to chip away at this ignorance that a group of American Sikhs set up the Surat Initiative. Their strategy is simple: walk up to ordinary American citizens with the offer to tie a turban for them and explain what it signifies in their religion and culture. And what it feels like to stand out and be different.

Last weekend, Gurbani Suri, a student of biomedical engineering at Columbia University, was a part of the turban day in Washington. For her, the most satisfying experience was talking about Sikhism with a devout Christian. "He came up to me asking about the beliefs and practices of Sikhs. We had a 15-minute conversation about our religions," she says.

Three metres of cloth have made life difficult for many in the Sikh community living in the US. It started post 9/11 when the first victim of a hate crime was a Sikh. Last year, a white supremacist gunned down six Sikhs at a Milwaukee gurudwara. Most recently, there was the assault by about 20 men on Harvard professor, doctor and community worker Prabhjot Singh in Harlem. Before that a judge of Pike County Justice Court threw out Jagjeet Singh, a Sikh who had been hauled in for a flat tyre, from his courtroom for wearing "that rag" on his head.

Early this month the results came in of a remarkable survey, 'Turban Myths' , undertaken by Stanford researchers and SALDEF (the Sikh American Legal Defense and Education Fund). It found that 70% of Americans misidentify turban-wearers as Muslim (48%), Hindu, Buddhist or Shinto.

The tendency, the study found, was to associate turbans with Osama bin Laden. It is to strike at this myth that last Friday, the activist group Sikh Coalition got Walmart and RiteAid to pull off their shelves a so-called Osama costume that consisted of a stick-on beard and a turban. "If you lost a loved one during the 9/11 attacks or during our nation's war against al Qaida, or if someone attacked your father in a hate crime because he wears a turban, I doubt this costume would make you comfortable," argued Sikh Coalition director of law and policy Rajdeep Singh.

The experiences of Surat Initiaitive have so far been pleasant. Not even in New York City, which Suri says is culturally diverse but reports many cases of religious bullying, did the group face any hostility. They ended up tying turbans for 700 people and talking to at least 1,000 about the tenets of Sikhism.

The UK has a better understanding of the Sikh identity but in an effort to highlight how much a part of its cultural landscape the turbaned man is social media developer Sukhwant Lota started his quirky web project, lookasingh! It showcases images of random Sikhs who pop up in passing scenes on televison, cinema or newsreels. It could be a scene from Harry Potter , Batman Begins, Johnny English , or a Barclays ad.

There is a story behind its name that goes back to Lota's childhood evenings on the family sofa watching EastEnders in the 80s. Every time a Sikh was spotted on the screen, someone would yell out: "Look, a Singh!" "As a child I grew up feeling proud and excited when I saw a Singh on TV, which wasn't very often in the '80s," says Lota.

The site, whose tagline is Celebrating Sikhs in Media, was initially set up as a bit of fun but the idea was to generate and raise awareness of the turban-wearing Sikh, says Lota. He began inviting screen grabs from visitors and the response was tremendous. Another offshoot of his website is the Snow Singh, the Sikh counterpart of the Snowman, pagdi/patka perched smartly on the head. The idea, says Lota, is to point out that the turban is not a marker of terror but an identity. "As a teenager I've had the odd random drunk person shout out derogatory names towards my turban . However, I've mostly just laughed it off, which seems to upset them even more as they are usually looking for an angry response. Being brought up in the UK you realize very quickly that some people are just totally ignorant to anything other than their own ways, and you just learn to avoid those people," he says.

A tough question for activists like Singh and Suri is how to mark the Sikh's peaceful place in the western world without perpetuating the Islamist stereotype (studies show that many Americans think Sikhs are Muslims). "We aim to be recognized as a distinct religious community but we do not want to do this by hurting any other communities. Our message has been twofold: one, that Sikhism is not Islam. And two that people should not be negative or angry towards Muslims in any case. We believe that everyone should be recognized and respected as human beings, and this is the spirit of Sikhism that we try to bring out in our work," says Singh.

I'm sure you will agree that it's a brilliant written article and fully emphasises what Look! A Singh! is trying to achieve. 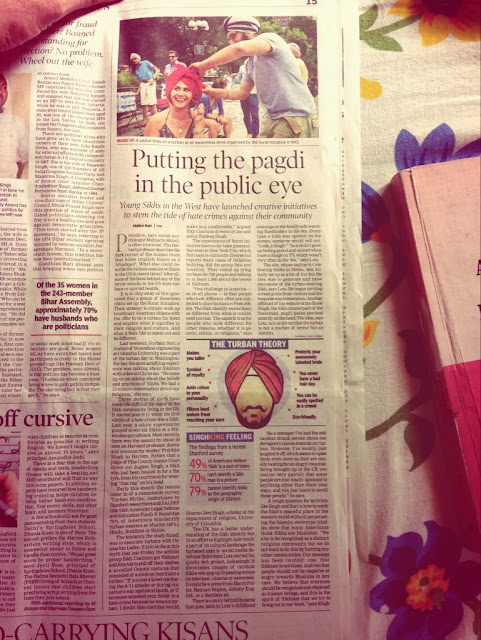